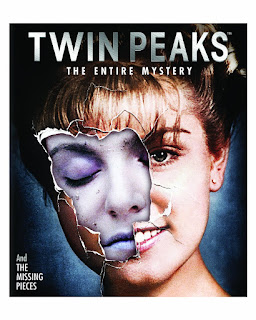 It’s hard to believe it’s been 25 years since Special FBI agent Dale Cooper said goodbye to his secretary Diane while talking into his hand held recorder having solved the problems found in Twin Peaks. It’s hard to believe that the series was only on TV for two years. And even more incredible is to think that when it was on it became such a phenomena that people gathered together for viewing parties in each other’s homes drinking coffee and eating cherry pie with a log sitting in a chair in the same room.

Yes people actually did that when the show took over the airwaves for a young generation trying something new. Director and creator David Lynch had taken a story he had to tell and turned it into must see TV. And then suddenly it was over. The murder solved. The mysteries around it figured out. Interest died and the show did as well. And yet a hard core audience remained longing for more.

Over the years various box sets have been put together for the show offering as complete a set as they could. First they had the series itself. Then the original pilot was included as well. Then extras were found and added. Finally Lynch’s film FIRE WALK WITH ME, a prequel to events in the movie was released and later added. Now all of these things have come together and been put on blu-ray for fans to enjoy. Just in time too as the series has been given new life on Showtime with a new series in the works.

So let’s pretend that you have no clue what TWIN PEAKS was all about. Odds are pretty good that could be since anyone 30 years old and younger wasn’t around to watch it when it aired. The series opened with the discovery of a body, that of the much loved and adored Laura Palmer (Sheryl Lee), found wrapped in plastic by the banks of a river in Twin Peaks, Washington. The entire town is shaken to the core, some more than others, as who is responsible for her killing as well as numerous town secrets are slowly unraveled as the series progresses.

Investigating the murder is not only the town sheriff Harry S. Truman (Michael Ontkean) but Special Agent Cooper (Kyle MacLachlan) as well. Cooper is not your normal everyday FBI agent either. His methods are truly different than most and his mannerisms are the stuff of legend. So much so that many felt the character of Fox Mulder on THE X-FILES was a take on a similar character. Cooper became as much the focal point of the series as the tons of other characters in the town, and when I say tons trust me, there were a number of characters involved in all sorts of chicanery in this town. Secret societies, crime families, cheating spouses, one eyed women, log carrying ladies and more inhabited Twin Peaks and we loved them all.

So why would anyone consider investing in this new collection? What’s new? Well to being with you now have the chance to watch the series in high definition, something that hadn’t been available before. There is both the American and international versions of the pilot that were made. The blu-ray debut of Lynch’s FIRE WALK WITH ME is included. There’s a new featurette with series creator Lynch and the actors who portrayed the Palmer family. Plenty of never before seen extra footage is on hand as well. And if that wasn’t enough there are newly transferred introductions to each episode by the log lady. Watch and you’ll find out who she is.

These days people talk about binge watching series, tuning into Netflix or Hulu and watching a series from start to finish. Those who are accustomed to this as if it’s the way things have always been will have a hard time understanding the dedication fans had to a series such as TWIN PEAKS and how they would tune in weekly, waiting in anticipation, recording the show on VHS to watch over again for clues and how they would avoid friends at the water cooler if for some reason they didn’t get to watch the episode as it aired. Those same people can now binge watch the series in the best format possible and find out what all the excitement was about. With the shows we watch today it might not seem all that strange but at the time it was unlike anything ever shown on TV. With this box set, now is the time to rediscover the town of Twin Peaks and share with others.

Click here to order.
Posted by Mark Turner at 10:53 PM