DUE DATE: NO PLANE, NO TRAIN, JUST ONE LONG DRIVE 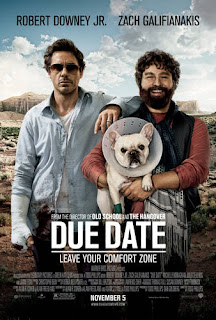 Road trips always seem to make funny movies. The discomfort of those forced to endure another irritating person or having to make do with a bad situation are situations we’ve all been faced with. So why not get a laugh out of the same thing at someone else’s expense? It made the hilarious PLANES TRAINS AND AUTOMOBILES one of the funniest movies even after 23 years. Yes it has been that long. Who better to take the reins from Steve Martin and John Candy than Robert Downey Jr. and Zach Galifianakis?
DUE DATE begins with architect Peter Highman (Downey) trying to make it home from Atlanta in time for the birth of his son. He begins by nearly being killed as he exits his limo by some yokel dropping off Ethan Trembly (Galifianakis). This leads to a misunderstanding (and some hilarity as Ethan attempts to put his luggage in the overheard) leaving Peter on the no-fly list, suspected of terrorism. Who else is there to blame but the goofy Ethan?
With his wallet packed and on the plane, Peter searches for a way home. Fortunately, or perhaps unfortunately, one presents itself when Ethan shows up with a rental car insisting that Peter join him for the road trip to LA. And so begins one of the most famous road trips that has some of the funniest moments in a comedy of late.
As the pair travel we get to see Peter as a stick in the mud, serious person with little room for anything in his life other than his own needs. On the other hand Ethan moves about willy nilly without a care in the world, looking at the trip as fun and taking care of his pet dog Sonny. In point of fact, this trip will change both men. Peter will learn in the oddest way possible what it means to be a father and take care of someone. Ethan will face the reality of his father’s death.
That’s another part of the story. Along for the ride carried in a coffee can are the ashes of Ethan’s recently deceased father. As Peter maps out their route to get them there in time, Ethan mentions that the Grand Canyon would be a great place for his father’s ashes to which Peter informs him that it’s miles out of their way. The topic comes up again later with a different location, each time revealing something more about Ethan.
The duo make their way cross country, stopping to pick up some weed (it’s medicinal for Ethan’s “glaucoma”), crashing their car, finding they have no money, a run in with a vet at Western Union and more. Each scene seems to offer more laughs than the last and no, I won’t spoil them by giving you details here. Suffice to say that there were moments that I had to either pause the movie or back it up once I stopped laughing.
But there is a sweetness to this movie as well. And that’s another thing that reminded me of the earlier PLANES. We have two characters, both stuffy and all businesslike that end up next to someone with a lot of well hidden pain in their life. The question becomes less about the physical trip and more about the emotional one that they both make.
Downey shines here as the jerk that has the best intentions in his decisions, a man who is fearful that he won’t make the birth of his child. Short tempered most of the time and very caring at others, he makes the journey to fatherhood over the miles. Galifianakis turns in his usual solid performance as the waif who needs something more in his life. His trip to Hollywood in hopes of being an actor, even though his character shows little ability, shows the dreams that so many have. My biggest fear with him is that he will find himself pigeonholed into these same roles. This one seems very much like the one he played in THE HANGOVER. It’s a curse that many comedic actors fall into but few rise out of. Take a look at Pauley Shore for a bad example.
The movie offers some terribly crude moments that are sure to offend some and make others laugh till their sides split. For the sake of my family I’ll plead the fifth (although one scene involving both Ethan and Sonny made me laugh harder when I saw the shocked look on my wife’s face while we watched the movie). And when the final sequence shows, amazingly enough during the whole Charlie Sheen brouhaha of late, you’ll find yourself touched by these two men and the trip they took. It’s a fun film that most will enjoy and will inspire at least a smile or two from everyone.
Posted by Mark Turner at 11:10 PM No comments: 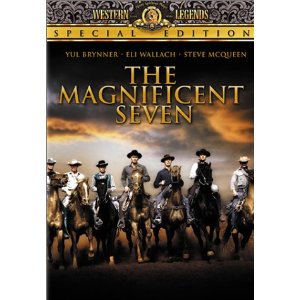 Another film that ranks high on the list of man movies is THE MAGNIFICENT SEVEN. Once more you have a group of actors that carried themselves in a way that guys envied them their confidence but that women thought were darn good to look at. The main thing that this film began though (and which carried over to my first “man movie” THE DIRTY DOZEN) was that it took a single individual who gathered together a small team to confront an enemy. It would be great to say that this was original to this film but the fact is that it was a remake of a successful Japanese film called THE SEVEN SAMURAI.
Yul Brynner stars as Chris Adams, a gunfighter with a conscious. When he hears of a group of poor Mexican farmers seeking aid in getting rid of a bandit that terrorizes their town and takes whatever they want, he accepts their proposition. With little or no money on hand (the farmers have little of value now), Chris sets out to recruit his team and he starts with Vin (Steve McQueen), another cowpoke who happened to be in the right place at the wrong time.
The two set out to fill in their group visiting other men that Chris has come across at one time or another, each with his own reason for joining or for fleeing their present situation. Britt (James Coburn) has just killed a man with his knife throwing skills in a fair fight that is sure to be questioned. Harry (Brad Dexter) thinks there is hidden gold in the village because what other reason would Chris have for taking on this task? Lee (Robert Vaughan) is a gunslinger looking for a peaceful place to live a quiet life if only for a while. Bernardo (Charles Bronson) sees it as an opportunity. And Chico (Horst Bucholtz) is a youngster who wants to make a name for himself, a boy who has yet to witness death but wants to stake his claim to it.
The team assembled, they head for the village and begin training the men of the village how to defend themselves. They set up traps, show them how to use guns and teach them that they’ll have to assist in defending themselves if they want the help of these professionals.
Eventually the bandits return expecting little or no problem. Instead they confront the seven for the first time. The bandit leader is Calvera (Eli Wallach) and he respects the seven but warns them that to stand in his way will result in death. Chris and his crew stand their ground and refuse to leave, choosing instead to defend the town they’ve been paid little to protect.
Once more we have a movie that is so well thought out and directed, in this case by John Sturges, that not a single moment watched unfold is wasted. Rather than focus on the panoramic vistas offered in most films, we frequently find ourselves in the poor dirt covered village. The heroes we watch are not the typical sort but ones who are flawed in one way or another. This was the beginnings of the anti-hero movement that sprang in the sixties, heroes that were not perfect in every way.
Once more a group of exciting and popular actors was assembled in to one production. Films like these would be impossible to pull off these days due to the contract and financial demands of those involved. The closest anyone has come has been the OCEAN’S ELEVEN films.
THE MAGNIFICENT SEVEN led to several sequels and eventually in 1999 to a short run TV series. The noble defense of the small town displays a sense of honor that characters rarely show these days. And in that demonstration of honor we have another piece of what is a part of “man movies”.
Posted by Mark Turner at 1:00 PM No comments: 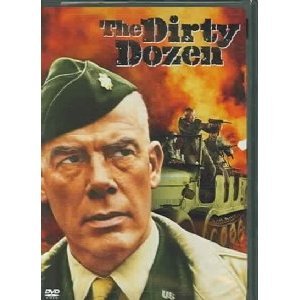