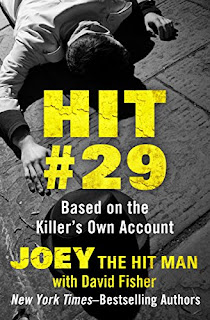 In high school for some reason I took an interest in reading books about organized crime. If memory serves me well I began with THE VALACHI PAPERS and move on from there. One book I picked up in paperback was KILLER: THE AUTOBIOGRAPHY OF A MAFIA HIT MAN. It took me a while to get around to reading it, actually when I was in college. It was a fascinating read filled with stories by a man who claimed to have killed a fairly large number of people while never being prosecuted for it.

That read came in handy when as a member of the programming board at Ball State we brought “Joey”, the author and subject of that book, to campus to speak. He was on tour promoting the book having left that life behind. As a member of the board we all went out to dinner with him that night. He told us stories of his life and later that night spoke before a large crowd with even more tales. Apparently he never left that life behind far enough as I have learned from the publisher that he succumbed a bout of lead poisoning in the form of being shot while at the race track, a favorite locale of his.

Which brings us to this book, HIT #29. In the book we’re given a few details of the not so friendly attitude Joey shared with another made man who calls him for a meet at a restaurant. The meet was set up by the man’s boss, a hit of someone they’ve discovered is stealing from the mob. The target is a head numbers runner who has systematically been hitting others with his inside knowledge and the help of two low level thugs. Caught and giving him up in the hopes of staying alive, they now know it was this man who set it all in motion. He was someone Joey knew from the neighborhood growing up. Now he’s being offered $20,000 to take him out.

Joey accepts the job reluctantly having just completed hit #28 not long prior. His rule of thumb is to law low for a while to make sure he’s clear of the first hit before taking on the next. But a bad day at the track and a few other items help him decided to take on this hit. What follows is his step by step routine of how he sets up the hit, how he prepares, the follow through and more. Along the way his suspicions of the man who presented him the job grow as well to the point he begins to wonder if his intended target is that or if he’s being set up to be the target himself.

The book is written in easy fashion, as if Joey were sitting there talking to you like a friend, recounting the story to your instead of writing it. For me, having met him (or at least the person who said he was Joey) I can see him now. A stout, solidly built man, not too tall with a moustache and slicked down hair, the ring on his hand with a coin surrounded in jewels (he told an interesting story about that to us that night) and a smile and pleasant attitude. And yet he’s a killer.

At the heart of it all that’s what this book is about, the killing of one human being by another. There is no hero to root for. Perhaps an anti-hero in the form of Joey, a man who may be actually fighting for his own life rather than taking one of someone else. While reading the book he does things and recounts past experiences that make you realize he is a criminal. And yet you find yourself hoping he comes out all right in the end.

If you enjoy crime non-fiction books then you’ll enjoy this one. It’s a glimpse of the life led by one of the members of organized crime. It tells you how things work, how he worked when performing a hit and provides you with a look most aren’t privy too. With any luck none of us ever will be. But at least we can read about it and be fascinated by the tale.

Click here to order.
Posted by Mark Turner at 12:40 PM No comments: