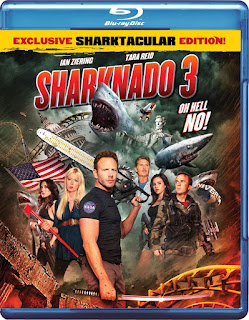 WE HAD A WINNER IN OUR LAST CONTEST!!!!!
Yes, Linda Amstutz of Decatur, IN, won the drawing for the "Rowdy" Roddy Piper Hot Rod T-shirt. Congratulations to Linda!

So let's move forward with our next contest!!!!

I know sooooo many of you have become fans of the SHARKNADO series of films. It would be easy to make fun of these movies but the reality is they are some of the most fun movies being made. Are they cheesy? YES! Are the ridiculous? YES! Are they hilarious? YES!

These films have been like some of the classic so bad they're good movies of the past, low budget flicks that featured names that became big and have discovered a legion of cult followers. With each successive movie they've gone further and further into the world of the absurd and taken some well known actors and actresses along for the ride.

Now Cinedigm, Digital Views and The Decatur Daily Democrat want to offer some luck person the chance to enjoy the latest in the series, SHARKNADO 3. This blu-ray edition of the film comes packed with all sorts of extras in this "Sharktacular" edition. So how can you win this movie for your collection?

All you need to do is send an email to dailydemcontest@gmail.com . Include your name, address and phone number as well as entering SHARKNADO in the subject line. All entries must be received by December 7th and the winner will be drawn on December 8th. It cost you nothing but the time it takes to send in your entry, so do it today!


UPDATE: Yes we did indeed have a winner of the SHARKNADO 3 blu-ray disc. Congratulations Jason McCullough!

PAPER TOWNS: LIFE IS AN ADVENTURE, LIVE IT 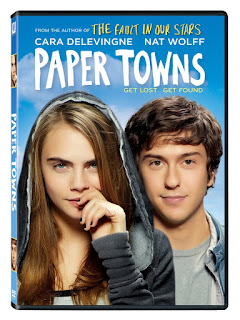 Coming of age movies have found a built in audience with teens for years. As far back as REBEL WITHOUT A CAUSE through THE BREAKFAST CLUB and on, the problems faced by teens growing up has felt a similar concept running through them while adapting to the situations faced by each successive generation. So it’s always interesting to see what comes next as we do this week with PAPER TOWNS.

Based on the best seller by author John Green who wrote last years THE FAULT IN OUR STARS, this movie takes a look at life through the eyes of narrator Quentin “Q” Jacobsen (Nat Wolff). As the film opens a younger Q tells us about the first moment he set eyes on his new neighbor Margo Roth Spiegelman and immediately fell in love with her. As they grow they start out friends but a chance encounter with a suicide victim’s body changes their dynamic. Q grows into a semi-nerd while Margo (Cara Delevingne) runs with the popular kids, becoming the talk of her generation with the various adventures she has supposedly gone on.

Q hangs with his two best friends Ben (Austin Abrams), a cocky little guy who talks big about his sexual conquests which obviously have never happened and Radar (Justice Smith) the only member of the trio to actually have a girlfriend. The prom is coming up and only Radar has a date. This is there life, a situation where all three never take walk off of the path to success or dare to do anything they shouldn’t. That all changes in one night.

One evening Q is awakened by Margo sneaking into his bedroom window. She tells him she needs to borrow his mother’s car but he refuses. Instead he tags along with Margo on her “missions”. They begin in a store purchasing items for the “missions” and then begin. Each revolves around Margo taking revenge on her so called friends after discovering that her boyfriend has been cheating on her with another friend. As they go from place to place their doing things which could get them in trouble but having fun at the same time. A moment between the two is shared. And then, the next day, Margo goes missing.

As Q tries to figure out where Margo has gone her friend Lacey approaches him to find out where she went as well. Q begins to find clues, the sort that Margo would use to solve the mysteries of life that have always intrigued her. As he and his friends cipher through the various clues Margo has left behind, Q becomes certain that she left them for him to find her. The end result is a road trip but it is the journey that it takes to go on the trip and the trip itself that offers the adventure these friends go on, a trip that changes their lives.

The term “paper towns” is one Margo uses to describe life where they all live. It references something mapmakers used long ago, false towns they would place on maps to insure their copyright to those maps. The towns were fake towns that didn’t exist but insured that one mapmaker wouldn’t use the same information from another’s. For Margo it represents an empty life, an empty existence. It also provides the group with their greatest clue.

The whole concept of the treasure hunt here makes for a lot of fun in this film. It creates the background story that links together the lives of the three friends, Lacey and Radar’s girlfriend along with Margo into something that explodes their lives from living the mundane existence that they have created for themselves and most likely will carry on till they die and transforms it into experiencing life for perhaps the first time.

The young actors here do a wonderful job of bringing life to what could have resulted in nothing more than cardboard cutouts. Each has their own quirks that make them who they are but rather than those quirks being challenges to overcome they are what make each of them special and a necessary part to the journey.

The story is one that grabs you from the start and holds on to you until the finale. Not only are these friends going on a journey, the viewer is as well. In the end perhaps each viewer will find themselves looking back in regret for a chance never taken, a journey never traveled. But the truth is that these opportunities for adventure never end. With any luck, those who go on this trip with Q and friends will seek out adventures of their own.

Click here to order.
Posted by Mark Turner at 10:15 PM No comments: