LET ME IN: VAMPIRE WITH A BITE 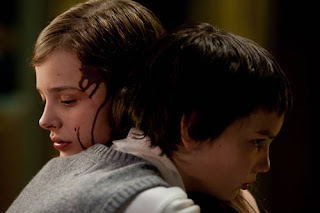 The past few years the vampire film has changed from what began as a horrifying creature to a seductive animal, followed by more creatures and finally with the TWILIGHT films a vampire more interested in seduction than say draining blood. All that changed with a well received Swedish film called LET THE RIGHT ONE IN.
As with most movies that have success that come from foreign markets, Hollywood made the decision to remake it as an English language film in the hopes of attracting a wider audience. Sometimes it works, sometimes it doesn’t. For me, this one works and works well. And for viewers who would rather not follow subtitles this movie should do the trick.
Directed by CLOVERFIELD director Matt Reeves it’s not so much a remake of the movie as it in an interpretation of the book. Reeves has gone on to say that he spoke with the author and found that his take on the book was what the author was attempting to discuss which was going through the awkward teen years set in a vampire story. It clicks here and Reeves does a great job.
Set in Los Alamos, New Mexico, we find ourselves in the midst of winter. Young Owen (Kodi Smit-McPhee) is a small boy prone to being bullied while at school. Living with his mother (a woman trapped in her own problems with a failed marriage, devout religious follower and alcoholic in training) Owen leads a lonely life. There are no other kids in their apartment complex and he spends most of his time sitting on the frozen playground outside in the snow. Until a new neighbor shows up.
Rarely seen this new neighbor moves into the apartment next door and at times Owen can hear conversations through the walls. The only person he sees is an older man (Richard Jenkins) who goes in and out of the apartment. Then one night Owen meets Abby (Chloe Moretz) who lets him know up front that they can’t be friends. But friends they do become.
Owen confides in her about the bullying at school. She advises him to just take the bully on up front, that he’ll back down once Owen lets himself stop being pushed around. She also lets him know that if need be she’ll be there to back him up.
What Owen doesn’t know is that Abby is a vampire. The man she lives with isn’t really her father but the man who takes care of her, supplying her with fresh blood that he extracts from victims he kills and then drains. When a draining goes wrong, Owen can hear two voices arguing, neither of which sounds like a child. Due to this accident, Abby is forced to go out and feed on her own.
Owen and Abby become close friends. Both lead lonely lives but find comfort in one another’s company. Each is the companion the other thought they’d never have. But would this be the case if Owen truly knew what Abby was?
While this story unfolds the police are searching for the savage killer on the streets. The bullies continue to give Owen a hard time as we wait to see if he calls their bluff. And the time draws near where we discover if Abby will reveal herself to Owen or not. And if she does, what will be his response?
The surface of this movie is a horror film with a few gory moments tossed in for those fans but a more horrifying tale that smolders beneath. It’s less about the attacks and bloodshed of the vampire and more about what it takes to survive, especially while being 12 years old for so long. Gone is the romantic adolescent version of vampirism and in its place a deeper story of what it’s like to be lonely in the middle of a world full of people.
Each actor does a fantastic job, most importantly the two young leads. For either of them to carry the weight and depth of their characters is something worth watching, for both of them to do so is amazing. Jenkins does a good job but is relegated to little in this film. And Elias Koteas as the detective searching for a killer does a tremendous job.
It seems that many horror fans have taken a liking to blood drenched horror that offers multiple mutilations these days. For those that like something to think about, that plays as much with your mind as it does your stomach, this is a movie that will whet your appetite. The pacing may be slow, but there’s a reason for that. This is a story that unfolds rather than slaps you in the face. And a good story at that.
Posted by Mark Turner at 9:03 PM No comments: 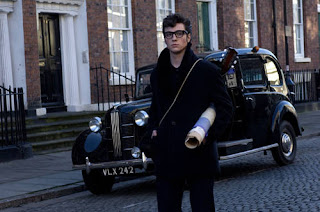 There have been tons of biopics made about various stars and musicians. Some are popular but bring nothing to the table. But then there are others that not only offer a new perspective on the subject at hand but have the ability to inspire viewers to dig deeper into the person they’ve just watched a film about. Such is the case with NOWHERE BOY, a biopic about the young John Lennon.
Rather than focus the entire film on the beginnings of the Beatles, it instead takes Lennon as its subject and brings them in later. Aaron Johnson stars as Lennon, living with his Uncle George (David Threlfall) and Aunt Mimi (Kristin Scott Thomas). When his uncle suddenly passes away, he sees a woman at the cemetery watching from a distance. Its only later that he discovers this woman is his mother Julia (Anne-Marie Duff).
In trouble at school and feeling he is suffering under the strict upbringing offered him by Mimi, John sets out to find his mother. A friend discovers where she is living and much to John’s surprise it’s within walking distance.
Arriving at her doorstep, he reunites with his mother and they become friends. But that’s the thing; they seem more like friends than mother/son. Julia is a free spirit, a woman who loves rock n’ roll music and wants to have fun, much like the adolescent John. And as their friendship grows it takes on an almost oedipal tone.
John continues to have school problems and eventually decides he wants to form a band. Recruiting various friends he forms a skiffle band that plays at local events. Then one of these friends brings along someone he knows, a fellow by the name of Paul McCartney and, as they say, history is made.
The rivalry between these two starts the moment that they meet. Paul is skilled at playing the guitar while John is merely using banjo chords his mother taught him to play. Paul, though younger, becomes a mentor musically to John. And while their rivalry is apparent, so is their growing affection for one another.
Through the story John remains conflicted by the adults in his life. Where one has raised him as her own she keeps a tight hold on him. The other offers him a frivolous life of fun but little responsibility. And as these two women, both who adore the young boy, face off with one another neither quite knows the affect that it has on him. But one day the words pour out of him in his music.
The best part of this movie is not the soundtrack though it is well done. The best part of the movie is actually discovering the tip of the ice berg that was John Lennon. In finding out the things that made him who he was, we are offered a glimpse behind the scenes at why he was the way he was, what inspired him, how he achieved fame and fortune. Most will remember the celebrity that was John Lennon, few knew the man. This film gives us a glimpse and perhaps will inspire those who watch to find out more about him.
Aaron Johnson does an amazing job as Lennon, never dumbing down his portrayal by trying to sound and look exactly like him, instead portraying the youngster filled with troubles instead. He performs the role as an actor portraying a character rather than as an actor mimicking a personality and the performance does well because of that.
Kristin Scott Thomas and Marie-Anne Duff both turn in interesting performances as well. They form the yin and yang that made up the man that became John Lennon; the much reserved and proper Brit and the fun loving free spirit that brought out more artistically. Each conveys their roles well but it’s the underlying emotions that they display with little more than a nod or subtle form of body language that makes their characters seem more real.
I wasn’t sure if I’d like this movie. Having lived through the later Beatles years (SGT. PEPPER was the first actual album I ever purchased) I knew the bits and pieces that made up the band. Lennon always came off as sort of a know it all, a cocky individual who always thought he was above everyone else. This movie made me rethink that opinion and want to seek out more information about him. My guess is that others will as well.
Yes the story of the Beatles is covered here and may inspire you to learn more about that too. But the fact is Lennon is front and center here. The film draws you in and never bores. What more could one want from a biopic?
Posted by Mark Turner at 9:00 PM No comments: