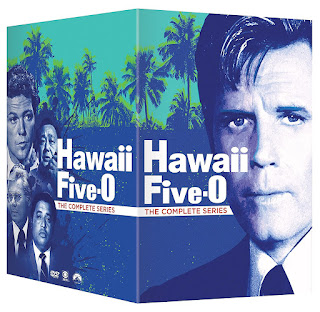 A controversy is raging right now that will affect so many movie and TV fans and yet most are probably not aware of it. The sales of DVDs and blu-rays has dropped recently. Most are citing the digital and streaming services that are out there. One thing you need to realize is that if you lose your internet connection or a server crashes all of what you own digitally or watch streaming is suddenly unavailable. This is why I for one support the existence of hands on media in the form of discs. They’re always there whenever you want them.

And one of the best things to happen with the release of DVDs is the ability to collect a TV series that you either grew up with or have grown to love. A number of these have reached shelves at reasonable prices. Some have come out in season form so that you could purchase them one at a time. But CBS Video has taken it a step further and begun selling off entire series in a box set that takes up less space. It might make for a hefty one time price but it ends up being cheaper than buying each season alone.

With that in mind let me talk about one that is being released this week, a box set heavy enough to make a doorstop. If you grew up in the sixties you knew this show and its theme son, one that got heavy airplay on the radio. I know it was in my collection of 45s from the time (kids ask your grandparents what 45s were). The show took place in Hawaii and revolved around a special state government task force to combat crime. The series was HAWAII FIVE-O and the entire original series is now out in a special box set.

HAWAII FIVE-O told us the story of U.S. Naval Officer Steve McGarret (Jack Lord), an imposing figure who stood tall, wore a suit and tie and was the epitome of a straight up law enforcement agent. The Five-O task force was put together by the governor and only answered to him. Each week the group would take on anything from kidnappers to secret agents, crime lords to foreign spies. No crime was too big or small for them to take on. Well maybe dognapping but little else.

While led by McGarrett he was ably assisted by his team. Danny “Danno” Williams was a younger officer played by James McArthur. It was McGarrett’s catch phrase to Williams that most folks remember, the old “Book him, Danno”. Williams stayed with the series almost as long as Lord, dropping out before the last season.

Also in his task force were two sidekicks. Chin Ho played by Kam Fong who was actually born on Hawaii was an Asian-American actor who actually served as a police officer for 16 years before becoming an actor. He made several movies but it was this series that made him recognizable. The other was Kono played by Zulu. Here again we had another native Hawaiian who made a name for himself in this series.

The islands of Hawaii were a major part of the series too, as if they were a partner in it all. The series was shot on Hawaii, something rare at the time. It exposed the rest of the country to the beauty of the islands with opening shots of clear blue skies, beautiful beaches and swaying hips in grass skirts to the opening theme song that became so familiar and was a hit for the surf rock band The Ventures. There is little doubt that the series, even though it depicted crimes taking place there each week, was a great help in promoting tourism on the islands.

This series was a hit at the time lasting longer than many. It ran for 12 seasons from 1968 through 1980. It lasted for 281 episodes. At an average of 50 minutes per episode that means there are just over 14,050 hours of show to watch. That means it would take 585 days running around the clock to watch the entire series. All of those episodes are gathered together in this box set. Fortunately if you have it on hand you won’t have to watch it in consecutive 24 hour time periods. You can take your time and enjoy them as you like and have them bring back memories of the family gathered around the TV set doing so.

As I said, this doesn’t come cheap. Right now amazon has it on sale for $116.40 with a suggested retail price of $179.98. But like I said, the amount of episodes coupled with the memories they provide makes it worth the investment for diehard fans. I mean that comes out to about a penny an hour. You can’t even park a car that cheap. If you are one of those diehard fans then make a point of picking this one up. The show along with a few extras will make you smile for days to come.

Click here to order.
Posted by Mark Turner at 5:49 AM No comments: