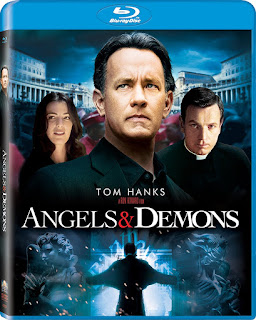 With the upcoming release of the new Ron Howard-Tom Hanks thriller INFERNO Sony has chosen to re-release their first two original outings together with the Dan Brown character of Robert Langdon. It’s a good thing to as some may have forgotten how great those two movies were. Not only that but it makes a great excuse for upgrading from the old DVD to blu-ray formats. And of those fortunate enough to have upgraded to the new 4k format it is available that way as well.

I’ve reviewed the first film so now on to the second. This time around we begin with the passing of the Pope and a papal conclave about to begin to select his replacement. Coinciding with this is a test at the Hadron collider where a new form of antimatter has been created. One of the team responsible is found murdered with a word burned into his chest: Illuminati. In addition to that, one of the containers of anti-matter has been stolen.

Symbologist and religious iconography expert Harry Langdon (Tom Hanks) is called upon by the Catholic Church to assist in investigating the murder and helping to interpret the symbols being used, in particular the one on the dead man’s chest. As the best expert in the field he is flown to the Vatican to assist only to find disagreement among the different security teams working there. Along with Vittoria Vetra (Aylet Zurer), one of the scientists from the Hadron collider and confidant of the recently murdered man there, the pair arrive just as a video message arrives for all involved.

Four members of the church have been kidnapped and are being held in a secret location seen on camera along with the container of anti-matter. As the recording plays out clues are offered as to what is to come. Langdon deciphers them to be a warning of the deaths of each and a final blow to the church to follow in the upcoming hours. But those clues also give him an idea of where to look for each coming murder and the possibility of catching the man behind it all.

The race is on as this film focuses not just on Langdon’s knowledge but the battle against the clock as one member is to be killed each hour from 8 until midnight. Each location will provide clues to the next. All of these clues stem from an ancient secret organization known at the Illuminati, religious followers who were persecuted for thinking there could be a co-existence between science and the church who went underground. Langdon is the perfect choice, the right man in the right place to try and stop not just the murders being planned but the possible end of the Catholic Church as well.

While featuring the same main character this movie is like the first film only in the lead actor and the polished look director Ron Howard presents on screen. The rest is far removed from that film in that this one spends as much time showing the race against the clock as it does Langdon’s attempt to try and figure out just what is going on and where. He finds himself drawn into conflicts where he has to become involved physically as well as mentally this time around.

Again the movie looks gorgeous. Howard has again assembled a crew that brings forth some of the most amazing scenes to watch, even more so when you learn that most of them were not even filmed in Vatican City or in the buildings there but on sets surrounded by green screens. The extra go into detail on how this was accomplished. You’d never know it while watching the film, a statement to how fantastic a job they’ve done.

Hanks is again perfect in his performance as Langdon. That right combination of awe when confronted with things like the Vatican library and the locations each clue takes him to combined with that sense of urgency as he tries to save another life is something that would not be possible in the hands of a lesser actor. Ewan McGregor as the late Pope’s right hand man, now in charge until the conclave finally selects a new Pope, does a fantastic job as well. Zurer attempts to hold her own and does so but her part never really feels fleshed out.

As with the first film this movie stirs curiosity in the viewer making you want to learn more about the history involved and the icons on display. It pulls you in as a mystery and has you wringing your hands that the bomb is found before it goes off releasing a force as deadly as an atom bomb if not more so. And when it’s over it leaves you wanting more, which fortunately we will have when INFERNO is released. One can only hope that Howard and Hanks don’t make us wait as long for them to film author Dan Brown’s other Langdon book, THE LOST SYMBOL. And if he write another let’s hope they pick up on that one as well.

Click here to order.
Posted by Mark Turner at 11:11 PM