HILLARY'S AMERICA: A MOVIE TO THINK ABOUT 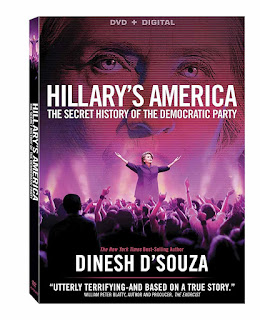 In this day and age it’s difficult if not impossible to not have a viewpoint when it comes to politics. I firmly believe that there is a minority of people on both the far left and far right and that the majority of the people in this country fall somewhere in between and move back and forth on various issues. But pundits, politicians and news people would have us all believer you’re either a white hat or a black hat depending on who they support.

Documentary film makers over the last decade or so have joined into the mix beginning with the Oscar win for Michael McDonald for his film BOWLING FOR COLUMBINE. I’ve long been a critic of Moore because his movies get released and within days the fact checking begins and an invariable list of falsehoods and misrepresentations are found, lengthy lists. And yet he is praised and held to high esteem, in part because he had no counterpart to offset his films.

Then along came Dinesh D’Souza.

With his film 2016: OBAMA’S AMERICA he broke the mold with a successful film promoting Conservative ideas. In 2014 he was indicted for illegal political contributions resulting in his incarceration for 8 months, fines paid and community service expected. The result of that was a new book and a film, HILLARY’S AMERICA: THE SECRET HISTORY OF THE DEMOCRATIC PARTY, just out on DVD.

The film opens with D’Souza entering prison and his discussions with fellow prisoners about how they got there and what it took to form a great con. In those talks he learns it takes 5 steps: 1-get a plan, 2-recruit, 3-pitch, 4-take and 5-never give up the con or deny deny deny. D’Souza then begins to discuss how in his opinion the Democratic Party has followed this plan, more directly in recent years.

He focuses on various moments in history re-enacted here discussing the twist of facts that we are currently taught. While we hear that Republicans are the party of slavery, racists and evil, he delves into the history books to discuss things that I for one was never taught. He talks about Andrew Jackson, a Democrat, being a slave owner and supporter of slavery and his land grab from the Indians in an effort to provide cheap land for people in return for votes. He moves on to the Civil War and discusses the fact that there was more support for slavery from northern Democrats than southern. He cites names, places and events in doing so.

He then talks to Carol Swain, an American political scientist, professor of political science and law at Vanderbilt University, about the alteration of history that’s been happening. While one would believe that the KKK was formed by Republicans the fact is it was founded by Democrats, its first Grand Dragon being Nathan Bedford Forest who attended the Democratic National Convention as a representative.

Other moments in history are brought to light and other names I’d never heard of in history classes. Ida B. Wells is one of those names, an African-American journalist, newspaper editor, suffragist, sociologist, feminist Georgist, and an early leader in the Civil Rights Movement and Republican. She talks about Henry Smith and the formation of anti-lynching laws. She discusses Margaret Sanger, the founder of Planned Parenthood and a promoter of eugenics and the extermination of the black race.

The film discusses how the things D’Souza learned about a hustle, a con, are being applied to politics as well. It all eventually leads to his talking about how the rules apply to the candidacy of Hillary Clinton not just in the current election but in her life from early on.

Rather than describe all of this I suggest anyone interested in learning make a point of picking up this film and watching it. But don’t watch it blindly, accepting everything you see as fact. Dig into it. Go online and research some of the items brought up. Fact check things in this film as ardently as you would a Michael Moore film. And while looking for information always consider the sources you read from. In researching critiques of this film I found short lists, the biggest being 5 items, that the writers questioned D’Souza’s information on. At least one of them was more concerned that he didn’t give detailed history on all topics other than what he discusses, which had he done what they ask would have resulted in a 10 hour film. Those critiques become diversion and the last part of the con: deny, deny, deny.

There is no doubt the Dinesh D’Souza has a partisan goal in mind. He wears his beliefs on his sleeve. But unlike Moore he doesn’t claim to be impartial, superior or smarter than everyone else in the room. He comes at the topic as a legal immigrant to this country who cares about it deeply. He doesn’t say one thing and do another (like slam capitalism while owning 2 million dollar homes).

The style of the film is polished and well made. Scenes are acted out and when available news footage is used. Re-enactments are on display throughout. All of them combine to make an effective argument for what D’Souza believes. But in the end as a viewer it is up to you to determine if you believe what he says or not. He presents his case in a mild mannered version rather than confrontational in your face styles favored by many film makes these days. So watch the movie. Dig into the issues. And then decide if he’s right or not.

Click here to order.
Posted by Mark Turner at 11:21 PM