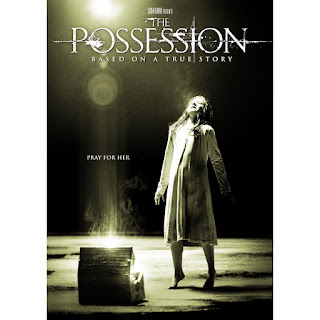 For those who aren't familiar with the name Sam Raimi my guess is you are aware of the movies he's made. Lately he's been associated with the first Spider-man trilogy starring Tobey McGuire. But long before that Raimi was a director whose first major film of note was THE EVIL DEAD, still one of the scariest movies ever made. That being said I guess it's no wonder that Raimi got into the producing side of the business. The latest film to find him in that seat is THE POSSESSION and it's one of the scariest movies I've seen in some time.

Jeffrey Dean Morgan stars as Clyde, a basketball coach recently divorced from his wife Stephanie (Kyra Sedgwick). The couple has two pre-teen children, Hannah (Madison Davenport) is the older of the two and of course the standard troubled pre-teen. Em (Natasha Calls) is the younger of the pair and still has high hopes of her parents reuniting.  With a new man in her life that's highly unlikely.

On a weekend when Clyde has the girls staying at his place they stop at a yard sale where Em's eye is attracted to what appears to be an antique box with some writings carved into it. Of course she's allowed to buy this and then takes it home. It seems like a puzzle box with no way of being opened, but eventually Em does get it open. And that's when things begin to happen.

Small things at first like a single moth in a room. But that escalates when during the night a bunch of these moths show up in the bathroom while Hannah is there which leads them to Em's room which is filled to the brim with them. A phone call to an exterminator and a trip him ends this visit.

As the story moves forward Em begins to show signs of becoming different. Her parents think it's nothing more than her reaction to their recent split. But there's more to it than that. A fight at school is described as more than a simple altercation with Em showing a substantial violent tendency that has he withdrawing from her friends as well.

Clyde begins to suspect it has something to do with the box and takes it to school with him to have a colleague look it over. The friend reads the inscription which is in Hebrew and says that the box contains a Dibbuk, an evil demon whose spirit is said to be contained therein. Clyde considers this the possible reason for Em's outbursts and throws it away. When Em finds out, she makes it appear he's hit her and runs to rescue the box from where Clyde threw it away. She also causes Clyde to lose any and all custody of the girls.

More strange things occur and Clyde continues to seek a way to save his little girl. With more research he travels to meet with a group of Hassidic Jews and shows them the box. They are the ones who finally give him the information he needs to know about what the box actually is. But will they help him rescue his daughter or is she condemned to whatever evil was contained inside the box?

The film could seemingly boil down to being called a Jewish EXORCIST. But it's not quite the same. How the case is handled is much different. Yes, there are some similarities but on the whole the story is handled at a slower pace with quite a bit less of the gore effects. This story is more a battle of good and evil. It also deals more with the question of how far a parent will go to fight for his or her child and just what they are willing to accept.

There isn't a bad performance in this film. I've become a big fan of Morgan since his days as the father of Sam and Dean Winchester on SUPERNATURAL. His portrayal of Clyde here shows the concern of a real parent for his child and the hopelessness he feels once he discovers what is causing the problem. Sedgwick does a great job as well although her time onscreen seems somewhat limited. What time she does have is well played. Both Davenport and Calls turn in great performances for actors so young. Calls especially stands out as Em, showing the two characters contained in one body convincingly.

It's obvious from the box art for this DVD as well as the commercials that ran when it was in theaters (the ones that showed fingers trying to work their way out of Em's throat when she looked in the mirror) that this is a movie intent on scaring the viewer. I've seen plenty of horror films and this one actually did give me a start now and then. But more than just offering a few jump scares, this movie had you in its grip from start to finish. It didn't feel like it had wasted space or time spans that made you want to reach for the fast forward button. This movie keeps your attention till the end. And if you get scared along the way on this trip, then that's just icing on the cake.