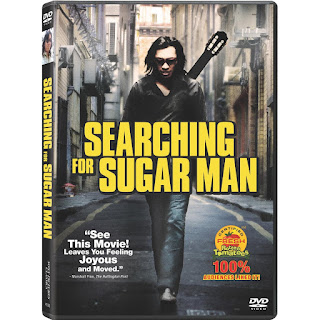 As I sit hear typing, the soundtrack to this week's best bet is playing, loudly, on my PC. When I finished the movie I found I wanted to listen to these songs again. I'm sure that this will wear off eventually as all music choices seem to do after a few days. But while the music may change, the amazement I felt at watching this story unfold will stay with me forever.

SEARCHING FOR SUGAR MAN is a documentary but please don't let that prevent you from watching this movie. So many are turned off to the term documentary and those that are lose so much by missing movies like this one. This is a story that will captivate you and uplift you by the end of the film. It's a story that begins sad and ends as story that inspires.

In 1970 Sixto Rodriguez released his first album. The producers of the album thought they had a hit. Here was someone from Detroit singing about the problems he saw, inspired by what was going on around him and they had helped make this album. With lyrics that brought Bob Dylan to mind, a voice that at times sounds like Phil Ochs, why wouldn't they expect great success. Unfortunately it never happened. Even when his second LP came out a year or so later, nothing. With those two albums released, Rodriguez disappeared.

Of course that was only in America. In other countries Rodriguez had a more interesting career and successful one. On South Africa this was when apartheid was going strong and young people were protesting against their government there. A bootleg of Rodriguez' album made its way to that country and spread like wildfire. In the songs found on the album a generation found a voice that spoke of things they were feeling. The government's response was to ban the playing of certain songs on the air which of course only made them that more popular.

That's a great story in itself. One would think it was enough. But that's just the first third of the story. That's how amazing this story is. Years go by and things change both in the US and in South Africa. When a CD reissue of Rodriguez' album was about to be released a record store owner was asked to write the liner notes. A questioned posed there inspired an investigative reporter to try and find out what happened to Rodriguez. Word was out that he had died. Stories ranged from him shooting himself onstage to lighting himself on fire before his audience. As the investigation continued, the writer was shocked to find that Rodriguez was still alive and well and living in Detroit.

Enough of a story right? But no! Found alive and well these same two men tried to let Rodriguez know just how influential his music had been to an entire generation. A record that sold so low as to make no notice in the states had sold over 500,000 in South Africa alone. So it was only natural that these same fans got Rodriguez to come to Cape Town to perform for those same fans. And perform he did...6 sold out shows to crowds to thousands of people.

The story of Rodriguez was interesting enough to inspire the director of this film. The success of the film was enough to interest the folks at 60 MINUTES who did a piece on his story, the only reason I didn't feel I was giving spoilers here in this review. But the truth is that just hearing the story, just knowing what happened, isn't near as interesting and amazing to learn as it is while watching this movie.

As with any musician there will be many who aren't crazy about each and every song but my guess is that when this movie is finished you'll be tapping your toe to several and more than likely be looking for a CD by Rodriguez. At the same time you'll wonder why his career didn't skyrocket here just like those who produced his albums thought.

The tale of Rodriguez is one that will touch your heart and have you amazed at this man as he is today. What he does with his newfound success is revealed at the end of the film. The saddest thing that could happen is for people to not discover the music of Rodriguez or the man behind it all. This is a beautiful film that tells the tale well and will hold your interest from start to finish.