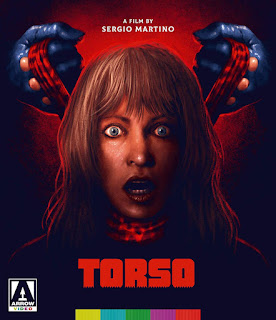 As a fan of horror films there are times that I’m amazed at the movies I’ve never been able to see yet. Most of them are movies that I either wasn’t old enough to see when they first came out, never played near where I lived or never had access to. VHS was a bad solution since back then movies ran about $99 per title. But with disc that’s all changed. Movies became affordable. In addition to that in recent years several companies have gone back through the vaults and rescued many movies from obscurity, some good some bad. One of the driving forces among those has been Arrow Video which I consistently praise and will continue to do so. They never fail to deliver.

Such is the case with TORSO, a movie long discussed and praised by horror and giallo fans. I’d heard of the film years ago and it was one that developed a certain amount of notoriety in the years following its release. One would think with a title like that and the love of blood in Italian films that the movie would be a gore fest that fans would flock to. What I found was something quite different than I expected.

That night two students go parking beneath a nearby bridge. Hearing a noise the young man goes to investigate. When he doesn’t return the girl goes searching for him. It isn’t long before the film’s killer gets hold of her and strangles here with a red and black scarf. It appears he cuts into her as well but the way the shots are filmed we never see the body and we’re not quite sure if this is what’s happening or if the killer, scarred by his past, is reliving something that took place before.

Hearing of the murder one of the fellow students’ rushes away with a few boys on motorcycles. Holed up in an abandoned house with what appears to be a group of free-sex/free drugs hippies (this was made in 1973 you know) she flirts with the two boys and allows them to grope her. Before things go too far she runs off with the boys in pursuit. In the woods they drive past where she’s hiding but the movie’s killer is there to catch her and she is killed as well.

School is canceled as a result of the murders. Franz and Jane make plans to meet the following week and an apparent romance seems in the works. Daniella and friends need a break from the events while they study and her uncle suggest they use a villa away from Perugia. They agree and head off to the retreat in the isolated villa. They’re not the only ones who have headed this way as they’ve been pursued by the killer. What reason could he have for singling out this group of girls? And which ones will survive?

All the elements of the classic giallo are on hand here. The killer being an unseen entity, face never revealed and in this case masked. The black gloves. The point of view shots from the killer’s perspective. And at the heart of it all a mystery as to why the killer is murdering, what his/her motivation is. It is the mystery in a giallo that makes them worth watching, trying to figure out who the killer is before the final reel.

For all its notoriety the film truly didn’t have near as much gore in it as I expected to find. Perhaps it’s another case of a movie where the viewers were so stunned at the time that they imagined seeing more than was actually there. TEXAS CHAINSAW MASSACRE has the scene of the girl placed in a meat hook that people still claim to have seen popping through her chest though it never happens. PSYCHO fans insist they saw the knife enter Janet Leigh but it never happened. This might be the case here. There is plenty of blood on hand but as for gore I’m struggling to remember much.

Director Sergio Martino was a prolific director in Italy and well known for the mark he made on the giallo genre. It’s easy to see why while watching this film. His use of cinematography and storytelling are excellent. That’s not surprising after having recently watched his film THE CASE OF THE SCORPION’S TAIL also from Arrow Video.

Horror fans have had the opportunity to own a copy of this film in the past but those releases are no longer available. Thankfully Arrow Video is offering the chance to own the film to those fans again who may have not done so at the time. Even if you did purchase one of the previous versions you need to pick this one up. Not only are they offering it with a brand new 2K restoration of the film from the original camera negative this release has the movie in 4 different versions from the original Italian to the American to the combined versions.

If you love giallo films or horror films then rush out and make sure to add this one to your collection. It is the ultimate version of this film to have on hand. And if you’ve never seen it make sure to check with that friend who did buy a copy and make a giallo movie night of it. The odds of you enjoying the film are high.

Click here to order.
Posted by Mark Turner at 10:48 PM