THE MAN IN THE MOON: POIGNANT COMING OF AGE 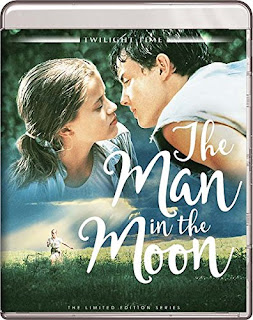 I remember seeing this movie long ago when it was first released to video. Yes, it’s that old. At the time I remember thinking it was a good movie but it never really stuck with me for some reason. I always recalled the name and that of the young actor in the lead role but it wasn’t until revisiting it just now that I was dumbstruck by the talents of this young woman. She was just 14 at the time and this was her first film. Her name is Reese Witherspoon.

The movie tells the story of two sisters in 1957 farm country. Growing up together they are the best of friends with Maureen Trant (Emily Warfield) the older of the two and about to go off to college at Duke. Dani Trant (Witherspoon) is only 14 and coming out of her tomboy phase, in love with Elvis and about to become a young woman.

The summer the story takes place in changes everything about the two girls. In the case of Maureen she’s unsure of what her future holds, not quite certain if she should get her education or simply marry a young man and become a housewife like her mother. She has a steady beau but his constant need for something more physical than she wants to offer is a block for the two of them.

Dani on the other hand still loves to jump in the nearby watering hole and spend her summer having fun when she can get away with it. Her father Matthew (Sam Waterston) wants her to start taking responsibility but her mother Abigail (Tess Harper) tells him that he must have missed that age when she was too young to run off and now is suddenly too old to have fun.

The catalyst for change comes in the form of new neighbors. Mother Marie (Gail Strickland) is an old friend of the Trants. A single mother raising three boys two are at that age of being unmanageable. Her eldest Court (Jason London) at 16 is the man of the family and on his shoulders lies the farm that they’ve just returned to.

Dani meets Court by accident before being formally introduced while swimming. The two are combative but beneath it all you can tell that she’s attracted to him, something she’s not quite used to and doesn’t know how to deal with. An attraction between the two develops but Court knows full well he is too old for Dani. But he might be just the right age for Maureen.

In the middle of this possible romantic triangle are a few other issues to deal with. First off is Abigail’s pregnancy which comes into question after she trips outside in a storm trying to find Dani who ran off for a midnight swim. It’s an event that nearly causes a few rifts in the family. Then there is Court trying to take on the responsibilities of a man while still in high school.

Before the end of the film all issues are resolved. Those resolutions are not easy ones and much pain is involved. What is left to discover before the credits role is just who will come out unscathed?

The movie is a marvel to watch on so many levels. Director Robert Mulligan draws some amazing performances from all involved. His experiences making movies like TO KILL A MOCKINGBIRD and SUMMER OF ’42 show how capable he is and this film just proves that even more. Freddie Francis is the director of photography and he brings to life the slow buzz of bugs in the trees and the slow soft hear of summer to life with each image.

All of the actors involved do a fantastic job. But most impressive is that done by Witherspoon. This is not to slight the other actors involved but the fact that this was her first film, that she went to a casting call hoping to get a minor supporting role and came away with the lead makes her performance all that more amazing. There are moments watching the film when subtle nuances in the look on her face would make you think she’d been doing this for ages. Why she was overlooked for an Oscar nomination for this performance is beyond me.

Released in 1991 this movie has never found itself in heavy rotation on movie channels or talked about much. That’s a shame. I found it to be one of the most touching and enjoyable films I’ve watched in some time. Hopefully word of mouth will help others to find this film. It deserves more attention than it’s received. Witherspoon has grown to show what a formidable presence she is and this is the movie that started it all.