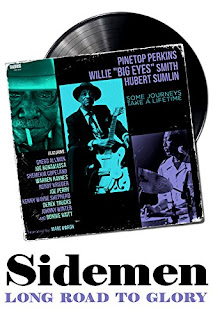 One of the major benefits of movies being released on disc is that some features that may never have had the chance to play in cities across the country can be discovered this way. Documentaries in particular seem to never make it to most theaters. Now they can be on disc. And like this feature some offer not just informative films but the chance for lost people from history to be discovered for the first time as themselves.
SIDEMEN: LONG ROAD TO GLORY focuses on three musicians that many have heard but few might know. Pinetop Perkins, Willie “Big Eyes” Smith and Hubert Sumlin were all members of two of the most prolific and well-known blues artists of all time, Howlin’ Wolf and Muddy Waters. While both of those men received accolades and recognition their sound wasn’t just their own but composed by the entire bands that they performed and recorded with.

The keyboards of Perkins helped fill out the musical sound of Muddy Waters and Smith’s drumming kept the band going to a steady beat. As members of his band they were treated well but as I said they were considered sidemen and not the main driving force behind the music not matter how important their input was.

Sumlin was finally recognized for his inventive and unique style of guitar playing that helped mold the sound of Howlin’ Wolf. Encouraged by his mentor and loved like a son the two played up until Wolf’s death. Guitar legends of today site his guitar playing as influential in their own styles.

Music fans realize the contributions made by the blues when it comes to rock and roll. Many have said that rock music is the melding of country music and blues music, the bastard child of the two. In many cases it’s easy to see how true that is. But perhaps it was the blues that had the most lasting effect. Consider, as is explained in part here, the number of British bands who were not just influenced but who performed old blues classics live and on record in the early sixties and you can see that influence.

The three sidemen came together to perform later in life and bits and pieces of those performances are on display here. In addition to that Perkins and Smith won a Grammy for a recording they made in 2010. Sadly Perkins was 97 and Smith 75 when they both died the following year. Sumlin passed away that same year at age 80.

But their legacy lives on and fortunately this documentary captures their lives for us to enjoy. Composed of bits and pieces of their performances in the past combined with interviews done shortly before their passing the film gives us the chance to enjoy their achievements and to recognize their accomplishments. The end result is not just an appreciation of their talent but helps to boost an interest in their music. I know I found myself seeking out their music to listen to. My guess is you will too.

This movie deserves a place on the shelf of every music fan who has picked up films like THE WRECKING CREW and STANDING IN THE SHADOWS OF MOTOWN, two films the allowed music lovers to discover performers who were responsible for the hits of the past but never recognized. All three documentaries not only increase an understanding of who was responsible for the sounds previous generations grew up with they bring back fond memories of that music and a greater appreciation of what went on behind the scenes. All three deserve to be savored and watched over and over again.

Click here to order.
Posted by Mark Turner at 1:00 AM