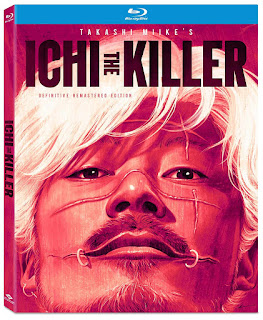 Director Takashi Miike is a director who breaks the mold and creates movies that don’t hold back. Having already made a name for himself in his home country of Japan it wouldn’t be until 2001 that he was noticed by a larger audience here in the US. One could say that happened 2 years earlier with the release of his film AUDITION which stunned audiences with its depiction of torture. But it was ICHI that drew more attention and got him noticed around the world.

Let me start by saying that the modern day Yakuza films that were popular in Japan were being made before ICHI was released and Miike had his hand in a number of them. His BLACK TRIAD SOCIETY films are sought after now as well as well as DEAD OR ALIVE. But it was ICHI that cemented his name among fans of the unusual and cinema lovers worldwide.

Based on the Manga of the same name, ICHI is the story of a yakuza gang in turmoil. When sadistic mob boss Anjo is brutally killed after beating a prostitute nearly to death by Ichi, a cleanup crew is sneaks in to take care of the scene. The gore strewn room is covered in blood and viscera but the team led by Jijii handles it with ease. When they leave the room is spotless and Anjo’s crew has no idea what has happened.

With Anjo gone his mob believes he has been kidnapped. The hunt is on for the killer and is led by underboss Kakihara. Kakihara is an unforgettable character, a man seemingly obsessed with sadism and masochism at the same time. It is the image of Kakihara that is most associated with the film, his smile increased by 2-3 inch slits on either side of where it should stop and held together with pins.

Finding that Jijii and his crew are in town, Kakihara approached the older man and tells him if he learns of anything to contact him. Jijii passes along information to Kakihara that it might be possible rival boss Suzuki was behind it all. Capturing and torturing Suzuki it isn’t until after that this lead proves to be false. To pay penance Kakihara cuts off the end of his tongue and presents it to Suzuki’s boss.

Realizing the lead was false, Kakihara and his men begin searching for Jijii and his crew. As they begin to follow leads, capturing each man, their standing with their boss comes into jeopardy and the Anjo crew is banished. This leaves Kakihara and his men open to trying to take over the mob they once worked for.

As all of this is transpiring Jijii continues to use Ichi to stir things up, killing various people along the way. Ichi is tormented by memories of the past when he was bullied as a child. Now he seeks to right the wrongs of his past by killing these men that Jijii points out are the same as those bullies of the past. It is Jijii who is controlling what is going on. Before the film ends just who is responsible for what as well as who will remain standing is revealed.

The movie is visually arresting with a huge color palette used by Miike. The garish clothing worn by Kakihara makes him stand out from the rest of his crew, was if the facial scarification weren’t enough. The bright lights of the city explode on screen and the dark alleys offer hidden shadows. It is a city most would not associate with Japan but it puts on display the fact that they too have their locations that run rampant with crime.

The two central characters of the film are polar opposites. Kakihara in his bright clothing delights in his sadomasochistic tendencies. Ichi on the other hand is dressed in black and fears the outburst of anger that push him into a psychotic stage. Kakihara is playing a game in his attempt to increase his power, Ichi is just subdued and quiet, sitting alone until instructed to do otherwise by Jijii. Kakihara controls people while Ichi is controlled. A final confrontation between the two is only natural and does happen near the end of the film, saved for the final moments.

The film is bold in its depiction of brutality among the different gang members. If AUDITION showed that Miike was unafraid to turn an eye towards torture in his films ICHI shows he would embrace it. He embraces the violence on display and forces the viewer to look as well, depicting it as something that happens, that takes place, even if we aren’t aware. While showing someone hanging from hooks located throughout their bodies, the cutting of Kakihara’s tongue and the murder of Anjo are brutal for me they didn’t compare to the beatings on prostitutes that left them bloodied, black eyed and with swollen faces. Those scenes felt more real and thus more gut wrenching.

But for all of that there is a certain beauty to the film. The story telling aspects make it one that you don’t want to turn away from, that you want to watch until the end credits roll. On top of that as the film moves forward you begin to realize that the character of Ichi is perhaps one of the saddest characters to ever appear onscreen. I won’t say why as it would be too large of a spoiler but trust me, among a vast number of characters who are either gangsters or killers it is Ichi, a killer himself, you feel for by the end of the film.

The first time I saw this movie I was only able to see if on a bootleg edition picked up at some convention. Since then it has been released over the years in this country but never like the current format that Well Go is offering now.

To begin with the film was originally released in the US at only 117 minutes long to get an R rating from the MPAA. This is the full-length, original 128 minutes cut of the film. A full digital restoration of the film which was done by Emperor Motion Pictures in 2017. The new transfer was done in 4k resolution from a 35mm inter-negative found at L’Immagine Ritrovata in Bologna, Italy. Since then it has been digitally restored and colour graded in 4k resolution. What this means is that this will be the most definitive version of the film with the entire film in the most brilliant picture it’s ever been offered in.

Extras are sparse but that shouldn’t matter. It is the film that is important. With Miike just releasing his 100th film (BLADE OF THE IMMORTAL reviewed her a few weeks ago) and with a number of his films finding their way here via Arrow Video, those who appreciate the films he has to offer will want to make certain that this one ends up in their collection. If you’ve purchased the film in the past, sell off that old copy and invest in this one. It’s the only way to have the complete film in the best format possible. Congratulations to the folks at Well Go for insuring that this film finds a renewed life.

Click here to order.
Posted by Mark Turner at 1:33 PM